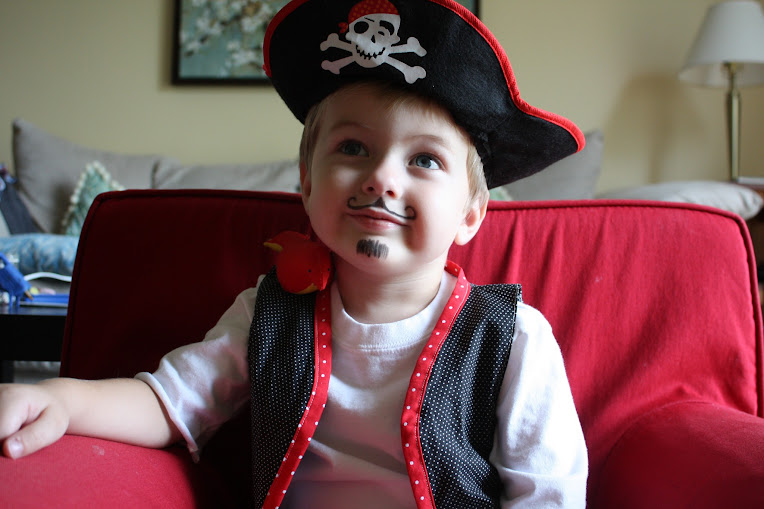 Halloween 2012 has brought us a pair of pirates! Charlie has been all about pirates lately, so it seemed like an appropriate costume choice.

Just like in years past, I tried to do way too much and my grandiose plans for homemade pirate pants resulted in this:

Shakira pirate hot pants. Back to square one. We ended up just going to Walmart and picking up some $4 red sweat pants that we cut up to look pirate-y. Much better! I used Dana’s pirate vest tutorial for Charlie, this adorable hat pattern for Margot’s hat (yes, that is an earring dangling from it!), and Spool’s bird tutorial for their parrots, which I attached to their shoulders with snaps! I was originally planning to sew them on, but Nathan had the great idea to use snaps. Who knew husbands have such great crafting ideas? The snap has come in very handy because Charlie continually wants to sleep with his parrot at night!

Last week, our Baby Bunch group had a fun Halloween party. Just take a moment to enjoy this picture. 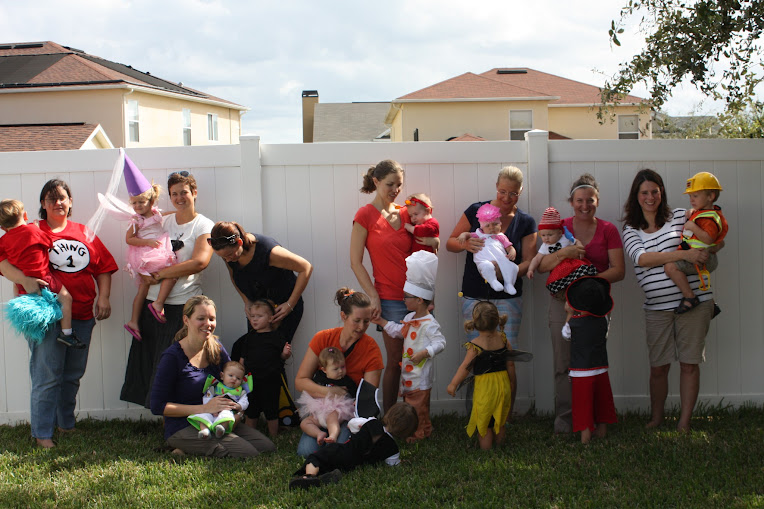 Doesn’t this look like a nice, relaxing way to spend a Tuesday morning? This picture perfectly depicts about 100% of our gatherings, there’s usually at least 1 child crying, some trying to run away, others completely oblivious to what is going on, but the moms are all enjoying it! I love these moms! We all met at the Baby Bunch group through the hospital when our first kids were tiny babies and since then, almost everyone has either had a second baby, is pregnant with their second baby, or thinking about having a second baby. It is so fun that our kids have literally known each other their whole lives! Charlie calls this group his friends and his friends from school are his “nother friends.”

We went to the annual EA Halloween party on Friday, which is always a good time. This year, the theme was zombies. Nothing like a nice, wholesome family theme!

They really go all out. On every floor, there were employees dressed as zombies, “missing” and “dangerous” signs all over with zombie-employee pictures, and even a fake newscast. It was quite the event. We thought Charlie would be scared, but he didn’t seem to even notice the zombies “eating” the fake limbs or the scary music playing in the background. He was completely all about the trick-or-treating! This is the first year that he really seems to get it, and boy was he pumped!

Here they are hanging out at Daddy’s desk taking a break from all the trick-or-treating through the cubicles. There’s also a pumpkin carving contest for employees. Here’s a fun one!

Charlie is so excited to hand out candy. Every time he passes the pantry and sees the candy he tells me, “These are for the trick-or-treaters. I’m gonna hand them out. Don’t eat these, Mama.” Okay, Charlie. I’ll just stick to eating your candy, instead

Some of you might be surprised to find out that Nathan is going to be running the Disney half marathon in January. No one was more shocked than me when he said he was going to start training for it, because in the over 9 years that we have been dating/married, I’ve seen him work out a grand total of about 5 times. Well guess what, people? It’s really happening!

Several months ago, he started with the Couch to 5k running program. It’s a 10 week program that takes you from sitting around on your couch (us) to running a 5k! It starts out slow. When I say slow, I mean you walk 5 minutes, jog 2 minutes, walk 5 minutes. Anyone can do that! After he finished C25K, he moved on to his half marathon training, which is a combination of the Galloway plan and what Track Shack recommends.

Two weeks ago was his very first “real” race, the “U Can Finish 5 miler at UCF. The kids and I went to cheer him on. Of course, the one day in Charlie’s life that he decided to sleep past 6am was the day that we needed to be up an at ‘em, so we actually had to wake him up. He was so excited to be out and about so early in the morning! 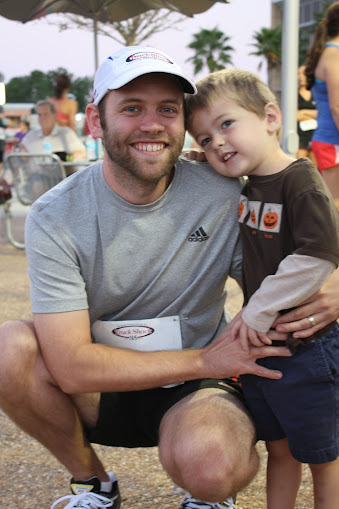 We found the perfect cheering place that allowed us to see the runners pass by twice, be a short walk to the finish line, and was also within earshot of the music fraternity that was serenading the runners. About 30 minutes into the race, Charlie noticed an older boy in front of us sticking his hand out to give high fives to the runners.

Charlie took this as an invitation to start giving them out, too! At first he ran straight into the sidewalk with me bolting after him. I set him up in a spot on the side and taught him how to hold his hand out and within seconds, runners were veering out of their way to high five him! This resulted in high pitched squeals, giggles and comments like ” That was a sweaty one!!!” every time. It was very cute and entertaining!

Nathan finished with a great time, about 47 minutes! We are so proud of him and can’t wait to cheer him on in January 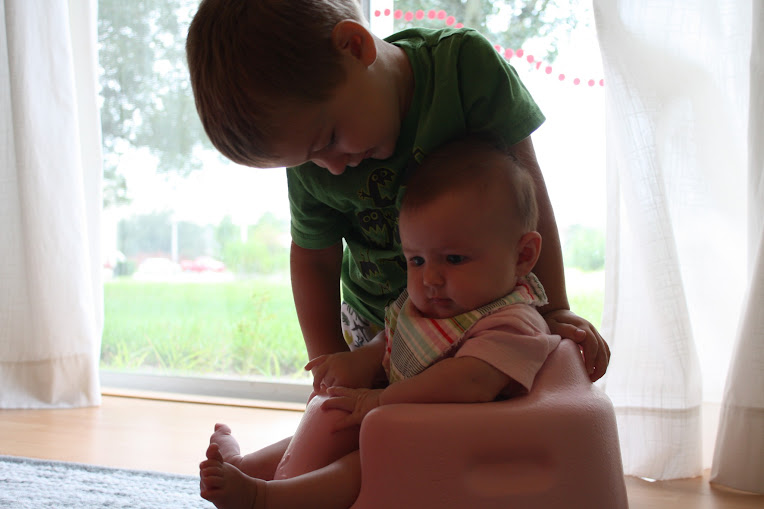 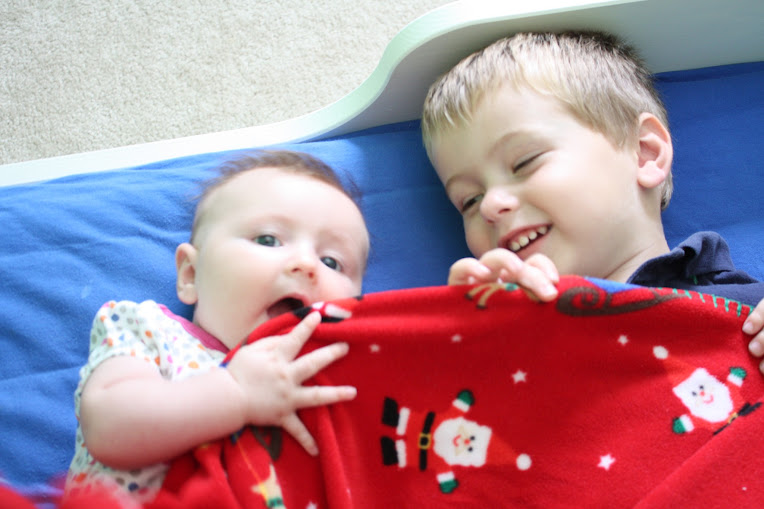 Charlie: Mama, can I have a cracker?

Me: Yes, but you have to be patient, I’m changing Margot’s diaper. 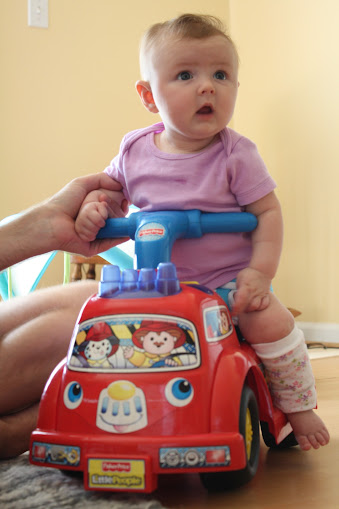 Nathan: We’re late! Do you know what late means?

We’ve had a few quiet weeks around Casa Burnett. Lots of playing at home and going to our new favorite shady park almost every day. Charlie has taken up a new interest in tennis after watching lots of different middle aged men hit baskets of tennis balls to no one on the court on several occasions. He just stands there staring saying “I want to go in there. I want to go in there now. I want to throw the little ball.” Sorry, Charlie. Maybe you can bother the man next time. 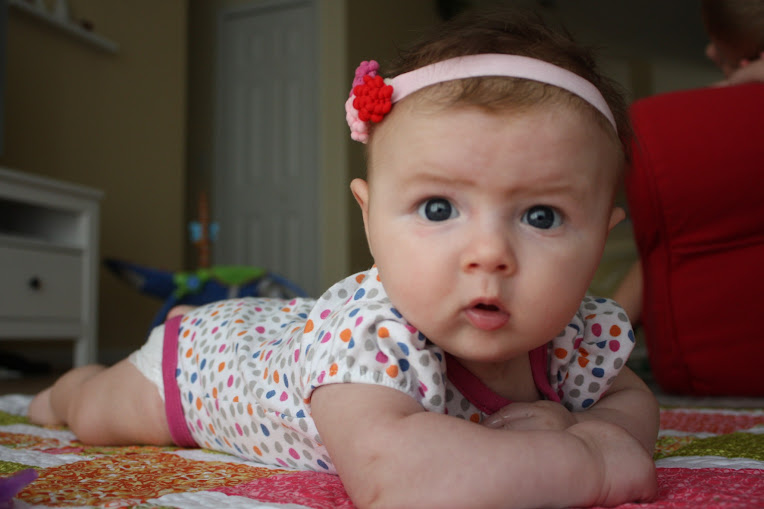 Margot is getting quite strong! She loves to play on her belly, cross her arms, and look around. However, every time she’s on her belly, this ends up happening within about 30 seconds 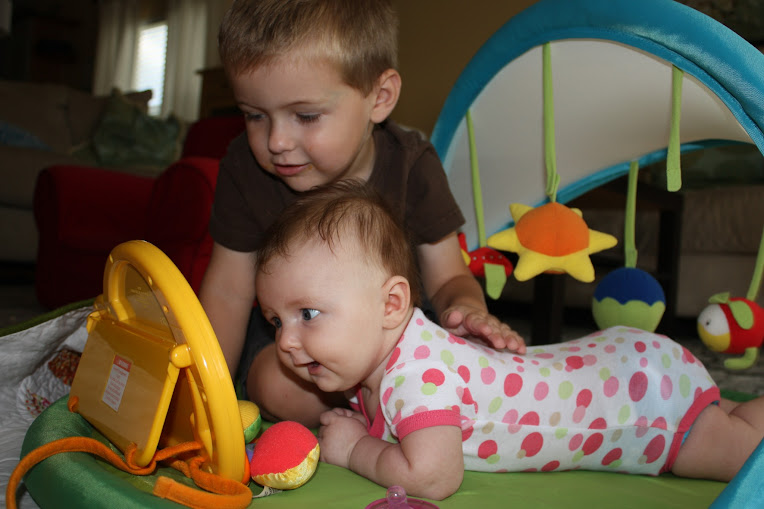 Now, this looks nice and sweet, but this quickly turns to this

“What is this kid doing!?” Charlie shoves himself under her little play mat and squishes poor Margot, usually with his arm around her waist/neck/head and adds some vigorous pats for good measure. If he’s not under the little “roof” of her mat, he’s busy putting his plastic lizard on top of it or trying to smush it. Margot has a long road ahead of her as Charlie’s little sister. At least the lizard isn’t real. I have a feeling that in a few years we’ll be dealing with lizards of the live variety.

She can really sleep anywhere! What a little snuggle baby, look at those curled toes. Nothing like sweet little baby feet!

Here’s our little wild woman being a fire lady thanks to Charlie. He wears this plastic hat that we got from the fire station all. the. time. I don’t know how much longer it’s going to last. It has a huge crack in it and is missing the little paper badge that used to be on the front. Maybe it’s time to get a new one.

Here’s a cute one of us from Papa’s birthday weekend. Look at that sweet hand holding action happening there. Margot can’t be bothered to notice!