Our garden has gotten quite out of control in the past few days. The tomatoes are now much taller than Charlie and the squash is starting to take over the chives. Charlie has been working very hard to find every bunch of tomatoes. Here, let him show you some. 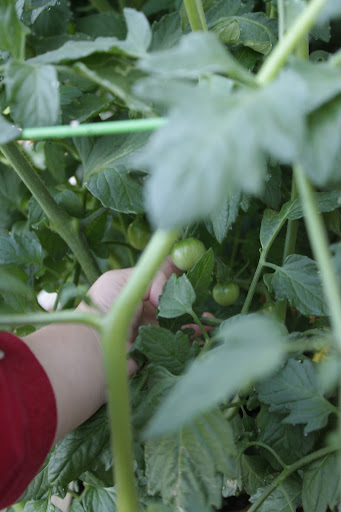 A few minutes after I took this picture, I found one lone tomato in the dirt. Very suspicious. Charlie and I did a science experiment and cut it in half. Yes! It looks exactly the same as a “real” tomato on the inside, just very small and very lime green. Charlie carried both pieces around the kitchen until he decided they were trash. His newest trick is to throw stuff away. This includes him finding anything he considers trash (napkins, tomatoes, money) and squeezing his arm through the tiny crack that appears when you try to open the child proof cabinet, and then trying to get whatever he’s holding into the garbage can. Once I even saw him open the child proof cabinet. This is getting scary. I actually saw him dump out my purse and start throwing coins away. I really don’t want to have to become a trash picker in my own house.

Back to the garden. 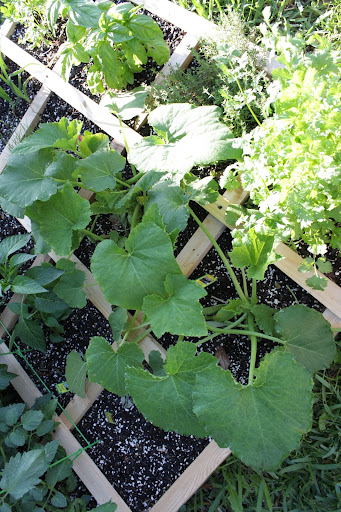 There’s the crazy squash. We’ve only had one casualty, red bell pepper. But when I looked back at the first picture that I posted earlier, I could tell it looked really wimpy and limp. We should have picked a better one. Oh well. See what I mean about the squash taking over? What should I do? I’ve been considering replanting the one in the middle to the middle bottom square in this picture (the red pepper’s old square). Maybe then it will spill over the side instead of cramping the chives? 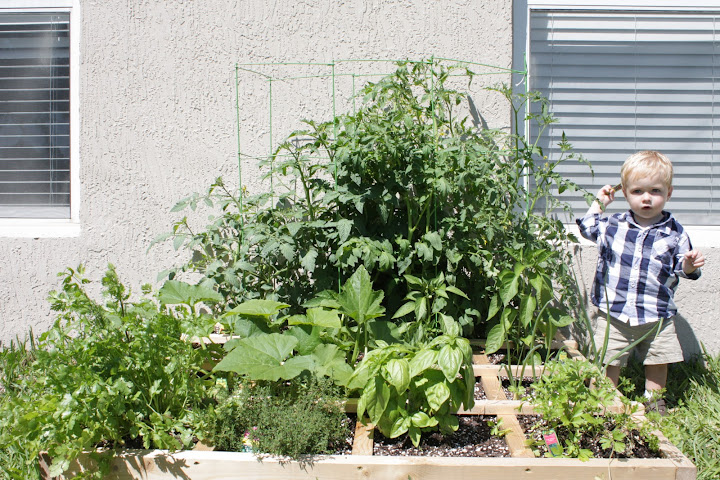 Told you this is getting crazy. Charlie doesn’t even know what to do! Look at the cilantro in the front left. Wow. I had just cut about 1/3 of the plant off about 5 days ago. So big! So, does anyone know what they’re doing when it comes to growing a garden? Have any tips for us? I’ll pay you in cilantro.

In completely non jungle news, Charlie wants to say CONGRATULATIONS to his Aunt Lili for matching with Tufts, her top choice, for her grad program next year! Look out Boston! Hopefully she’ll be able to fit all her pairs of boots in her car for the move up! Maybe she’ll just have to leave those Fryes in Oviedo.

One thought on “Raised bed jungle”